The Wilkens Home on the Internet 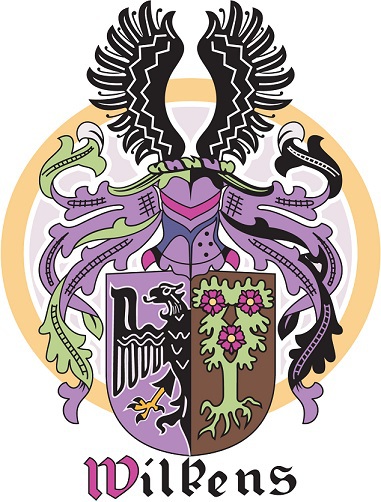 The name "Wilkens" originated in Germany, and has been traced by German genealogists back to its origins as a variant of the Latin word "Villicus" in the 12th century. In Latin, the word Villicus means the manager or overseer of an estate or village.

Besides the Wilkens families that still live in Germany, you now may find people (of German ancestry) named Wilkens in the Netherlands, Denmark, Norway, Sweden, the United States, Australia, Chile - and small numbers in other countries! As a result of the Engles/Saxons (obviously including one or more warriors named Wilkens) invading the British Isles, you also find the variant Wilkins and the subsequent derivatives such as Wilkinson, all of which are common family names in England.

The crest shown on this page was found on the wall of a castle in Germany and was professionally redrawn using the original colors and layout.